Saved By The Bell

What a week!!!!!! To say it was punishing is an understatement but starting off on a positive, it's the end of the season!!!!!!! YESSSSSSSSSSSSSSSSSSSSS. I think the family needs the break this time, and we are looking forward to tackling small jobs over the winter with no drain downs and more about recouping our energy for 2013.

The weather was just too much of a change and sometimes Mother Nature has the final say, and this week was the case. The lads fished their hearts out but with a water temperature drop of more than 10oc and the lakes being shallow they could not buffer the shock and that was that. It was all out to just put a fish on the bank and even the pellet put in at the start of the week could still be seen in the crystal clear water 4 days later, with no sign of the roach even eating it.

The last day the temperature rose from the -3oc to 13oc but it was a little too late, but we did save the day!! On the last night with baits placed precisely on the spots, Pete after his 3rd swim move had a 34lb mirror from peg 5 followed by an absolute stunning young scaley in full winter colour. Adam in peg 3 had a fish on at 05.30 Saturday morning only to lose it to a hook pull and his reel falling off the rod!!!! What can you say about that?

Even with the tough challenge the lads enjoyed the week and talked of a return when the sun is shining and the birds are singing, but like I have said a million times "The fish you work hardest for, mean the most" and I don't think he will forget that Scaley fish anytime soon.Is was a shame to end the season like that but October did fish well with some good fish caught, and I would have loved to have made it to the end of the season with a great story to tell but I was asking too much.

The lads said the fish started crashing again on the Friday night and when we were packing the gear away Saturday morning the first fish I saw all week rolled over Adams spot in peg 3, You swines.  After the lads had left I spent the rest of the day running the predator lines over the lake to keep the Cormorants off and I did see another good 6 fish crash out, so I think with the change in the weather the fish did seem to be on the move again, but hey that's fishing.

All in all in turned out quite well in the end for the season, we might not have produced our first 60lb but we will over the coming years and not just that but the young stock coming through are fish to get really excited about, Crayfish and weed are under control and a thing of the past, big lake shaping up for the future, new website that is truely unique, informative and could only be "The Sanctuary Fishery" and as we have tried so hard to maintain over the last 6 years, our customer service is still our priority!!!!

It's time for a hard earned beer and I will be putting my pencil to paper with some lovely wildlife and fish art work over the winter months which will be listed on the website.

Once again thanks to all our regulars who have shown their support over the years and we hope to keep providing them happy memories that you all return for!!!

We will be back soon, even if it's not a fishing report but I'm sure something of interest will be posted each week like me dropping the Hallowen Pumpkin tonight down the full flight of stairs onto the floor below and smashing hot wax and pumpkin juice all up the walls, Oh Jayne loved that one :) 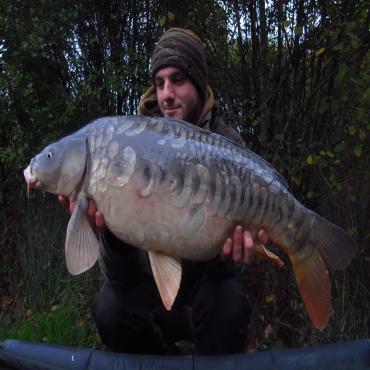