It dropped to -3oc last night with a very hard frost everywhere and the contrast from last week of 23oc max and T-shirts is stark. I do feel the two lads on for the last week of the season will find it hard going just because of the massive temperture change, but hey, anything can happen at this time of the year and some good fish have been coming out for the last 3 weeks.

The lads started off very well last week but things did start to slow down towards the back end of the week with the temp drop and Full moon.

On the Friday night the lads started to pack away for the morning, putting most of their equipment under the veranda at the shower block with rain and sleet forcast. Now to say they make the lads hard up north is an understatement, and nobody is as keen as myself when it comes to fishing, but Craig in peg 3 sat on a chair all night under a brolley for a last chance fish, crazy or what. I came down in the morning and it had touched 1oc on the Saturday and this crazy Sheffield lad had spent the night on an old deck chair, keen or what?

Also a good 6 fish lost for one reason and another which did once again affect the final tally, 9 fish was the Total with the best being the 49lb 12oz followed by the 47lb 12oz, 43lb 12oz which was 3 new pb's for the lads. Martin in 5 worked his socks off for a 28lb but the fish were just not down there and it was peg 1 again doing the business towards the backend of the season and 3 also producing through the week. 4x 30lb+ (including 3 x mid 30's to 37lb) the 37lb Grassie and the 28lb.

It was a good week all round with the lads once again being good company, great weather for the time of the year and some lovely fish.

All pictures where on I-phone/Samsung which seems to becoming more common these days with the great image quality, so will update when they send them through.

Just one for the eyes, a picture come through this morning from Steve who fished a couple of weeks ago. Last fish of the week was one that I have never seen caught so far and the last time I saw it was on a drain down in 2009. Not a big fish but a cracker and what a result for him!!!! We all do love a "Fully"

Back soon and hopefully another few good fish to report, fingers crossed as long as we dont have frost bite. 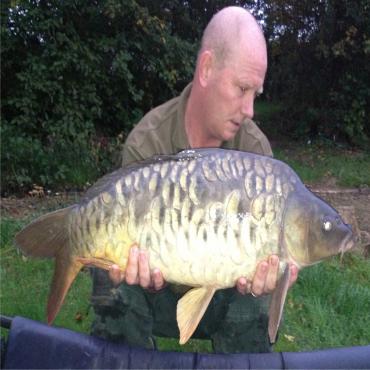