Surprise In The Coypu Trap?

Well I had a nice surprise this morning while doing my rounds, at this time of the year the Coypu can be on the move as winter is encroaching and even though I now have the numbers reduced to nearly Zero, they will come up from the stream around this time of the year if allowed to do so. Well, I poked my head through the cage door and a Pine Marten was in there, no harm done at all because the doors just close shut and he is contained inside, but I tried to take a quick picture and then he was off up the nearest tree and gone in a flash. What a stunning creature and a real pleasure to see at such close quarters.

Well the fishing has continued and Dave in Peg 1 has landed a new pb of 49lb 12oz, the same weight as the fish the week before. I checked the pictures on his I-Phone and it's a different kipper from Neils fish so all is going well. Craig in peg 3 has had a 43lb 12oz followed by the first grassie to come out for a good month at 37lb+, what a fish that was!!!

Apart from that we are still enjoying the late season sunshine and getting ready for the cold front moving in. 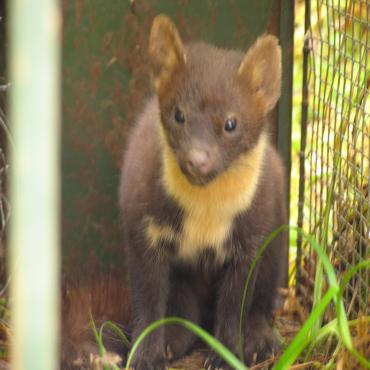