Well the first week is over and some nice fish have been caught, but by God it's it unseasonal weather at the moment. We have had some changeable weather for the last 3 years but I did not see this one coming. The begining of March was beautiful with temps in the upper- teens, with myself mentioning to Jayne my wife that we are set for a hot year ahead if it stays like this. But after the eclipse the weather seemed to turn on its head. What had me baffled was the ferocious winds smashing into peg 5 but Graham had fish from the off in the teeth of it, the least place where you would expect the fish to be. A lovely brace kicked the season off within an hour of arriving weighing in at 44lb 6oz, 45lb 10oz. Then on the first night he followed it up with a brace of 32lb Mirrors, but the weather was making it hard going just to get baits out to your spots without putting a rig in the trees, and the water is clearer than I have ever seen it, but it looks amazing to watch the fish going back in such clear water.

On the Monday Dave in Peg 1 had a 20lb+ fish that he did not weigh in the night and Graham took another fish of 26lb 12oz. Nev in Peg 3 had very little signs of fish infront of himself but netted a stunning dark orange coloured mirror of 39lb late in the afternoon.

Tuesday saw Dave catch the largest fish of the week at 47lb 5oz casting down into Peg 2 from 1. Nev took another fish of 32lb and Graham a 35lb+ as well. With the wind still remaining strong it dropped a few trees that I had to clear up followed by snapping some brand new landing net poles while stood up on the Pegs!! (Nice quality Greys) So the lads started to slow the bait down knowing that the fish were just not feeding much.

Wednesday was quiet but then Graham had another fish of 40lb 8oz on Thursday and lost one. Dave had a 30lb 8oz mirror on the Friday followed by a 29lb 14oz soon after that put up one hell of a fight. The last fish of the week then fell to Dave again with another mirrror of 39lb+ on the Friday night .We started to see more signs of fish moving on the Friday than we did all week so things looked set to improve along with brighter skies set for next week but still remaining cold.

One thing that was evident was the condition of the fish, they had the most stunning colours and all in tip-top shape with no fat bellies and all looking fit for the year ahead. 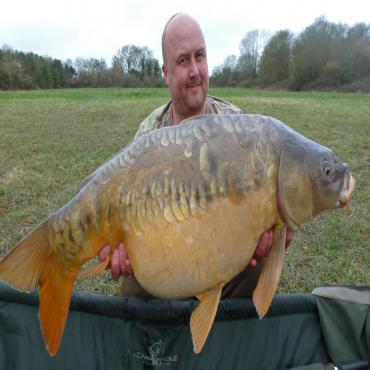