Put Your Back Into It Shirley!!

Well another week has passed and it's been a very enjoyable week as always with one of our regular groups from sunny Shropshire. The weather has been very testing indeed for the first part of the week, remaining cold with the continuing easterly wind leaving hard frosts most mornings and keeping the temperature of the lake well below the seasonal average. By midweek the wind swung around and it was glorious full sun with no finer place to be in the world by the waters edge, with the Nightingale and Cuckoo breaking the silence with their beauitful song.

The near bay on the 15 acre lake was completly drained out last week, I had left around a 3rd of the lake volume to be emptied once the winter rain had passed, so with the water still cold I finished the job and removed 50 very special looking C2 carp for growing on elsewhere, Thanks boys for the second set of hands it was appreciated.

The fishing was sporadic with most fish be caught either late evening, night or early morning, leaving the days quiet and time to lie back and enjoy the warm Spring sunshine. The infamous "Cockney Roger" once again took the largest fish of the week at 50lb 12oz beating his on PB by 4oz!! from Peg 5. Mark in Peg 2 was consistant all week picking fish up everyday and I must say fished it very well indeed. Shirley in Peg 1 was still learning how to put a bend into his carbon, having myself out in the boat with a fish tethered that he could not land, while I was thinking he was "cracking daft" playing the fish like Mr Bean, sorry buddy. After getting above the fish in the boat and managing to handline the fish into the net, followed by cutting the line free, we managed to return the most stunning mid 20lb common unharmed which is pictured below.

Karl started off slow with no fish in front of himself, but after working hard with the marker and keeping his eyes peeled he started to pick-up fish towards the backend of the week with the best being a grassie of 37lb.

The week total was 32 fish but a lot of young stock fish showed up this week which can happen earlier in the year when they seem to wake up and start feeding before the larger fish. Its a balanced stock with the young fish playing a vital roll within the ecosystem and stunning at the same time.

Considering the conditions the lads had a good week and know how to enjoy all the elements of the Sanctuary, it was our pleasure as always boys and we will see you next sunny April.

Thats all for now folks. 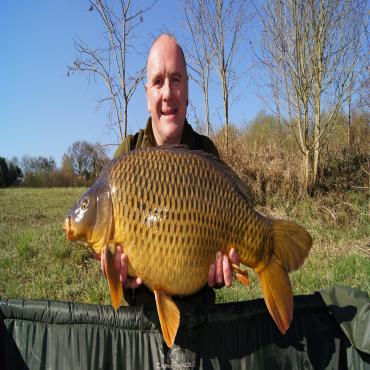