We are running a couple of weeks behind at the moment, so apologies for the lack of updates. Its been a busy month with anglers and getting ready for the 15 acre lake project once again. The 14 ton track machine is having a full overhaul at the moment, ready to go on the lake bed in the next month, I just hope the storms don't keep hitting us, making the work ahead more difficult, but on a positive note the storms over the weekend have turned the fish onto a feeding frenzy with bubbling taking place all over the lake like I have not seen for many seasons.

Two weeks ago we had a group of 3 on the lake, and the fish had just started spawning with the young males chasing, but the change once again in the weather seems to be holding them off. The fish are moving on mass as one group at the moment, which can make things tricky when you only have small numbers of people on the lake, allowing the fish too much room to stay safe. The lads managed 15 fish with the best being a male of 42lb+ for Rob and lots of upper 30lb fish making the bulk of the catch with a couple of 20s to finish, lots of males in the catches of late, telling me the bigger females are wanting to spawn. The fishing seems to be so much more consistant this season, no blazing weeks but steady catches for each group makes for a much better season. Last week we saw a Husband & wife on the lake giving the fish a nice break along with Graham having to move 3 times to keep on the fish, but catching from each swim over bait seemed to be the winning method. 12 fish was the weeks catch, with the best going 45lb 12oz which gave Graham a 20 minute runaround, he said is was one of the hardest fighting fish he has ever landed. The rest of the catch was nearly all 30s, including 3 of 38lb+ and a 39lb+, same again a lot of males in the catch. The fish are showing signs of steady growth again and some of the scaley young fish are going to be very special over the next 12 months!!

This week is another follow-on from the previous week with another Husband & wife booking the lake exclusively, looking for tranquility, enjoying the stunning wildlife and catching a few good carp to boot. Steve settled in Peg 2 for the first night with so many fish bubbling and ripping the bottom up in front of the swim it was only a matter of a few hours before he landed his first of the week at 38lb+. After the 50mm downpour this weekend the fish look set to keep on feeding so hopefully Steve can hold a few fish and keep them coming this week.

Like I have always said at this time of the year the fishing can be a little slower, but with some thought and planning, plenty of fish are there to be had, along with the lake looking its very best in full bloom and the wildlife to keep any nature lover in seventh heaven all week.

I will follow more pictures on FB when they come through, and will make sure to update the blog at the end of the week. I will also take a few snaps of the nearside of the 15 acre lake while empty, it looks like a desert at the moment but just wait until the machine starts shaping things up!!! its going to be very special indeed!! 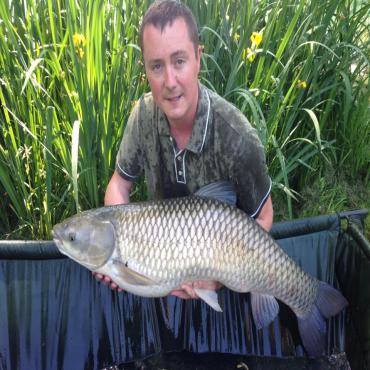