The shows Not Over Till!!

We have had two chaps book the lake this week exclusively and it could not have turned out better for the time of the year. Chris & Martin came here 2 seasons ago, returning this year in June thinking spawning could catch them out but it was far from that with the fish feeding hard and the first 3 days they were knackered with none stop action!!

The chaps opted for Pegs 2 & 3 being close at hand to help each other and enjoy the week, but it also allowed them to cover plenty of the lake. As the week went on they both fished out in front of the swims not having to cover further areas to produce pick-ups, with the fish feeding so regular, baiting little and often had the fish coming to them. By Sunday they had landed at least 9 fish with the best being a Grassie of 40lb+ and a 39lb+ mirror with this continuing through the week. The weather was ramping up slowly over the week with temps in the upper 20s, bright blue skies and the birds singing, it was perfect week to be on the bank enjoying what the next run could bring.

Martin in peg 2 had a good 70% of the fish, with Monday night producing 4 fish over 40lb+ for him with the largest going 48lb 8oz, but the best was saved till last when Chris pipped him at the post on the Friday night with a solid block of a mirror bringing the needle on the scales around to 49lb making it the largest of the week!!

Some stunning looking fish landed this week, with the young stockies coming out around mid 20lb and set to be the stars anytime soon.

Once again the key was getting the fish feeding on a good bait, little and often resulting in the lads using 20kg-25kg+ of boilies throughout the week and making the fish work for the bait more than the angler working for the fish, good angling chaps. 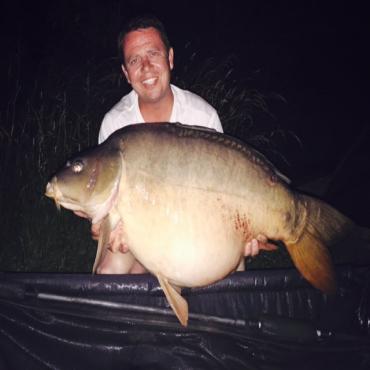