Well it's been red hot all week and set to continue through next week without a cloud in the sky. The Brummies have all caught fish and fish over 40lb+ for each of them which is good going considering the conditions. Once the fish settle down after spawning which can take a week or two, they start feeding again even if the weather is warm, I think they have adapted to their environment and you rarely see them swimming around the surface like you will back in the UK on a hot day. I have to admit the fish have come closer in this week because the lads have been on the quiet side, and they have been ripping the bottom-up around Peg 4 area close in off the little beds of weed that are present. It also helps because no one is fishing Peg 4 so it allows the fish to come down the left hand margin and sneak in & out for a feed on the naturals.

Fish have come both to the Boilie only rods and the Pellet and Boilie spots, but the big difference is the number of fish to the Pellet/Boilie rods. It seems to be attracting all manner of fish into the swim, so even though more carp are falling to this approach, for the lads, some Tench and a hand full of young Stockies have also moved in on the spots. Saying that, equal number of 40lb+ fish have come to both the lads rods so it's not been a clear divide in relation to size of fish. I think the key has always been to build swims for the week and have the long term approach in your mind, you can chase them with bags and fish do fall to this method but nearly all the better fish come to the greed factor of pulling them in to your spots.This has been demonstrated by Steve in fine style down in Peg 5 by keeping the pellet and broken boilie going in little and often resulting in the best catch rate this week.

The fish are starting to come back into condition and most of the cuts and Fin damage is starting to heal after the frolicks, lets hope it's a good backend to the season now and more fish of 50lb+ seeing the bank.

Picture from Big Phils I-Phone of one of his 3 fish over 40lb+this one going 43lb+. It seems every man and his dog are using their phones these days to take pictures which does not surprise me with the quality of the pics they take, only problem is getting the images off them!!

Back soon with more fishy news as and when it happens. 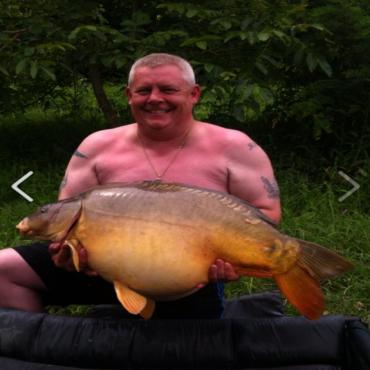