Well one thing is for the certain the fish will not be bored this winter? With over 2 dozen CD's hanging off the predator lines over the lake they have a chose of Busted, Finding Rita and the best of Take-That (not mine) to keep them happy!!!

It's been a week of cutting the trees back along the far bank and with the bait boat ban now in place I wanted to prune the trees back a little harder to prevent the fish hiding up under the far bank bushes. I have not been too harsh but enough to cast tight to them and access underneath, if you can cast and don't have glasses like "Eddy The Eagle". The main worry was the tree in front of peg 3 that has caused a few problems this year, I think this tree has slowly dropped forwards out into the lake over the years and a few major limbs needed to be removed which can be seen from the picture. No fewer than 6 rigs were removed, wrapped around tight to the branches and 2 rigs with boilies still attached!!!

Well like I said it would not take me long to get wet, and I must have been a Water- Rat in another life. I had been finishing off the lines at the start of the week, and with only a few left to put out I was around 10 feet up with my waders on straddled across two limbs as thick as your thigh and as anyone knows who have met me, "there's more meat on a butchers pencil", so it was not my weight that caused the limb to go with a crack like a bull whip as I plunged into the lake margin!!! I would love to say it was like the seen from "Passion For Angling" when Chris Yates launched himself into Redmire, or like Tom Daley going for his Bronze Medal, but Oh no, I hit the water like a sack of S--t. Only to trudge back upto the house and relay the story back to Jayne with her interrupting with "are those trees Crack Willow!?" My reply "I'm not sure" while stripping down to my underpants with mud and crap all over me!!!

I have a few days left of clearing a few more branches and I can then start to top the lake back up and leave the fish in peace. One thing worth mentioning is the amount of clear spots I have come across now the water is clear and the lake level a few feet lower, all along the peg side of the lake and tucked to the left and right of each peg out of the way. I think the fish do spend more time down the near margins than most of the anglers realise, and these spots might not produce numbers of fish but can produce something a bit special at times. The far bank does produce the bulk of the fish, but if 90% of the anglers bait is put there it will produce the bulk of fish caught each week. Next year I think the lake will change again and with no boats and the lads casting more I'm hoping the fish will spread out, which they did more this year than in the past, we shall see.

The weather is still mild in the day and the fish have now become conditioned to the temperture change and are showing regular on both lakes. It's great to see the fish relaxed and doing what they do naturally, and when you see them crashing out 10 yards in front of the pegs I know they are cashing in on the larders of food they have not had chance to tap-into while anglers are present.

I have a few drain downs coming soon for other people so if anything intresting arises I will keep you posted.

That's all for now. 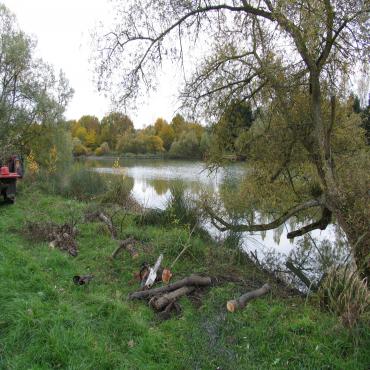